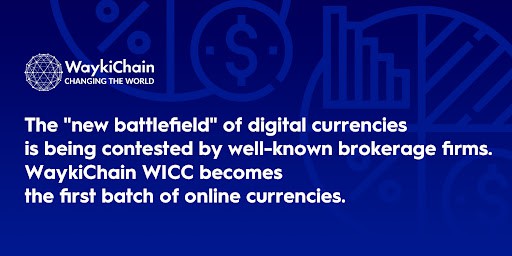 Due to the active trading of cryptocurrencies like Bitcoin in recent years, major brokerages have also begun to target this market.

As a broker under the Waton Group, which has been deeply involved in the Hong Kong and US stock markets for many years, WBroker has shown its professionalism and prudence in the selection of the first batch of online currencies.

As the leader of the currency industry, the selection of Bitcoin and Ethereum goes without saying. A large part of the reason for WaykiChain’s selection is that it has always been the technological leader in the field of blockchain public chain. Since its establishment four years ago, WaykiChain has experienced several milestones of development of Dragon, Teng and Tiger.

The iteration and development of the three versions of “Dragon”, “Teng” and “Tiger” allowed WaykiChain to create a vertical public chain line positioned in the integrated DeFi system.

With this technical foundation and extensive community foundation, it is not difficult to understand that WaykiChain WICC, as the representative of the public chain, was selected into the list of the first batch of Wbroker to support transactions.

This is the first brokerage digital currency platform launched by WaykiChain WICC. Is it possible that the next one will be Robinhood? People look forward to.

WaykiChain is a block public chain focusing on blockchain technology development and related operations. WaykiChain has positioned itself as an infrastructure that is based on both Ethereum and Blockchain, intending to trigger a collective growth of different industries by presenting an enterprise solution.